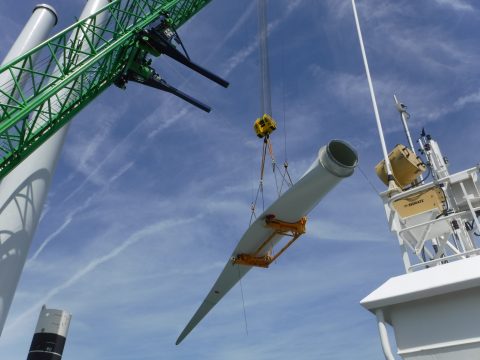 As demands on offshore wind installation processes increase, crane technology is being pushed to its limits. Not only do offshore cranes need to lift heavier and larger wind turbine components, but they also need to operate in more gruelling weather conditions.

Increasingly, vessel owners and contractors are looking to meet these demands by boosting crane capabilities with technologies such as taglines and various forms of intelligent lifting systems. But there are important implications of these additional demands that impact crane design and performance.

A crane is normally designed to lift certain loads at a certain radius, with the crane boom designed according to calculations at the limit of its capabilities.

But when cranes are equipped with performance-boosting technologies such as taglines or intelligent lifting systems, these limits are severely tested. In such cases, it can be necessary to add rails to the crane. These crane rails allow better control over the crane and its load – also in higher winds.

Crane rails allow the use of a trolley, which can then travel over the whole length of the boom, no matter how long it is. They also allow for ideal angles and a firm connection to the lifting tools throughout the whole lift. This is crucial to the ability to control the lift.

When intelligent lifting systems are activated, additional forces are exerted on the crane, as the purpose of such systems is to restrict the free movement of the hoist and its load. These forces will pass through the trolley to the rails and into the crane.

Adding crane rails and guidance systems will also increase the weight of the boom, which in some cases can limit the capacity of the crane.

For new cranes, adding rails is relatively straightforward as the rails become part of the design and manufacturing process. You can determine the thickness and configuration of the plates and then calculate the extra weight and forces that the boom can handle.

Adding rails to existing cranes requires additional planning. Several things need to be kept in mind, including the geometries of the boom from the top and side perspective.

It is less complicated to have a straight boom, seen from the top and side view, and add rails close to the crane’s main cords. This is a better way to manage the additional forces caused by reducing the movements of the main hoist.

If the crane is not straight on one or two sides, then a frame needs to be developed for the crane and the rails hung on that frame. Detailed calculations will ensure that the additional weight is kept to a minimum. The dimensions of the rail plates need to be as small as possible, while still sufficient for the additional interface forces. The more weight added, the less the crane can lift on that radius. This is especially important to consider as turbine components become bigger and heavier.

The additional rails can be welded onto the crane. Probably a more cost-effective solution, however, is a clamping system, which involves clamping the crane rail directly onto the main cords. This is effective for straight booms, as seen from the top view, while for tapered booms, you need to use clamping cross-beams, similar to railroad ties. A cleverly designed clamping system will be simple, easy and fast to install, which will help minimise the vessel’s time at the quayside.

When an intelligent guidance system, such as Boom Lock, is added to a crane, it should be placed close to the boom rest. This will not only allow you to sea-fasten the system for transit, but it will also allow ease of access for maintenance as well as mounting and dismounting the system.

Despite the design considerations of adding rails to the crane system, the potential upside is significant. A simple tagline system without crane rails will have a relatively low maximum wind limit. On the other hand, a rail-based system enabling the use of intelligent lifting systems will allow safer, more accurate lifting in higher winds. For example, successful tests of the High Wind’s Boom Lock system were conducted at Ostend in which blades were lifted safely and accurately at wind speeds of 15m/s with gusts up to 20m/s.